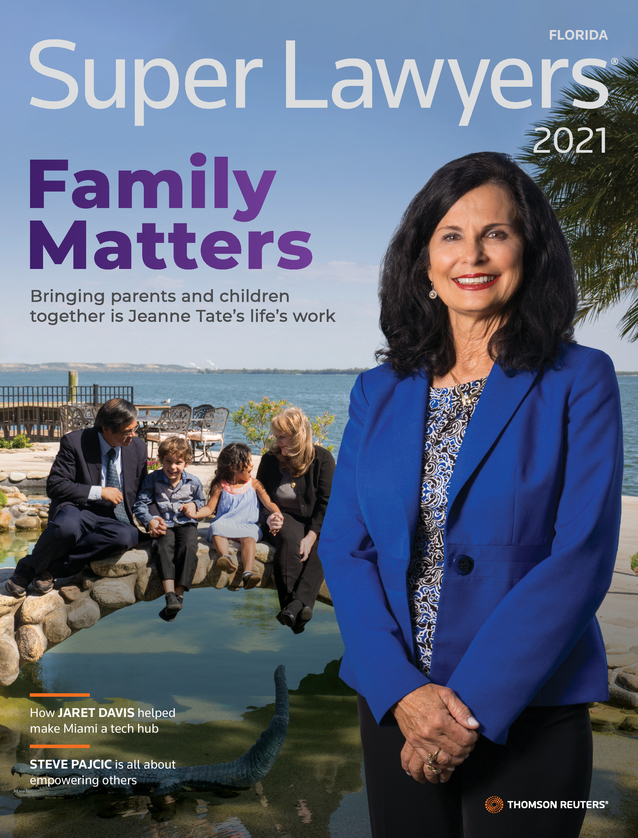 Florida Adoption Attorney Jeanne Tate was the featured cover story on the 2021 Super Lawyers Magazine by Thomson Reuters. This article highlights Jeanne’s long history of uniting children with families. She adamantly believes that there is a home for every child, and she has made it her life’s work to help place those children into loving homes, no matter the obstacle.

Want to learn more about how Jeanne got her start in Adoption Law? Read her story that starts on page 18.

More about Jeanne: For many years in a row, Jeanne has been named in The Best Lawyers in America, Florida’s Legal Elite, and Florida Super Lawyer, including as one of the top 100 lawyers in the State of Florida. Over her career, Jeanne has won several prestigious awards including the U.S. Congressional Angel in Adoption Award, the Tampa Chamber of Commerce’s Small Business Leader of the Year, the Florida Adoption Council’s Lifetime Achievement Award, the Hillsborough Association for Women Lawyers (HAWL) Achievement Award, the Tobias Simon Pro Bono Service Award (the highest statewide pro bono award given by the Florida Supreme Court) and inclusion in the Martindale-Hubbell Bar Register of Preeminent Women Lawyers. Jeanne has been appointed to serve on the Adoption Law Certification Committee, the Judicial Nominating Procedures Committee, the Thirteenth Judicial Circuit Court Nominating Committee (twice) and the Florida Supreme Court Judicial Nominating Commission (twice). Additionally, Jeanne has been an Adjunct Professor at the University of Florida College of Law where she taught Adoption Law and Procedure for six years.